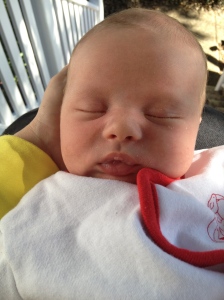 Sleep and babies is a complex issue that we often make light of. We laugh in public with our friends about how hard it is and we cry in private over how hard it is. Having a baby after loss has added another dimension to an already fraught subject.

My second son died in his sleep. He died doing nothing more dangerous than taking a nap. Babies need sleep, so do parents, and yet how could I trust it? When I was pregnant, I would say, “I just want a baby that doesn’t need to sleep.”  Of course, that would be ideal if I didn’t need to sleep. In those early weeks, when I was so very sure that Elijah would be stolen away in the same way Xavier was, I did not sleep very much. But it was okay. I could handle it with my husband home and the sheer exhilarating joy of having a living baby in my arms. But it wasn’t sustainable.

Up until Elijah was five months old, he slept in a cot beside my bed. He would stir and I could comfort him. When my heart starting beating fast at the thought of losing him, I could place my hand on his and be reassured. He stayed in that cot for longer than he should – he too large for it and me not ready to let it go.

Then we moved him into his own room, with monitors and sensors and a deep-seated fear. I would hesitate before entering his room, steeling myself for the worst. He didn’t enjoy the move and at seventeen months, he still rarely sleeps through the night. He would cry, and I would immediately go to him. How could I not? How could I deny this precious little one anything? What if his life was cut short?

When Isaac was very little, and I was completely innocent of loss, I would breathe a deep sigh of relief when he finally settled. Mothers know that feeling – when your baby is finally silent and relief sinks into your bones and meets the tiredness that lives there.  When Isaac’s cries finally gave way to softer breath and sleep, I would lean back into my own pillows, exhausted and fall into oblivion. I could not do that with Elijah. He would settle and a new set of anxieties would begin. A crying baby is a living baby. A silent baby might not be. And so whilst he had the sleep he desperately needed, I lay awake with terrors I could not silence.

My fears for Elijah have lessened as he has grown older. I no longer go to bed convinced I will wake to tragedy. But terror still flares. When he is unwell, I imagine the worst. And some days, for no reason at all, I will hold him tight, fearful for his future.

I have pretended that surviving on four to six hours of sleep a night is perfectly normal. That is perfectly possible. That it doesn’t effect me. It does effect me. There have been times when I have driven and I shouldn’t have. There have been times when I have placed myself and my children in danger by doing so. Yet, somehow, the possibility of an accident is distant and improbable. Whilst the possibility of Elijah being stolen away in his sleep is plausible, and for the longest time, even likely.

Someone once described managing the sleep of a rainbow baby the following way: imagine losing your child in a plane crash. Now imagine having another child and being forced to take a plane trip with that child, several times a day. The risk of Elijah dying by SIDS is not significantly greater than any other baby. Yet, for me, it seems so probable. For the first few months of his life, I was sure his plane would crash.

We now have a child that cannot settle himself to sleep. It feels like a failure on my part. We have had to exercise some tough love and let him cry it out. Every sob is a dagger to my heart. Every single fibre of my being wants to go into his room and comfort him. I am terrified that he will not wake in the morning and his last memory will be of crying out for me and being ignored.